The cyclist's rule of thumb - Safety first. Stories shared from the more experienced riders we have had the pleasure of riding with cannot stress further the importance of wearing a helmet. One fine example was shared by Taiwoon. His friend had a nasty fall and was spared from more serious injuries by his helmet, which cracked during the fall. We wouldn't dare imagine the outcome if not for the helmet. After 20 mins of vain testing, we settled for the Limar 575s. Here is Gwyn with her first ever helmet in white, clearly very ecstatic with her new purchase. 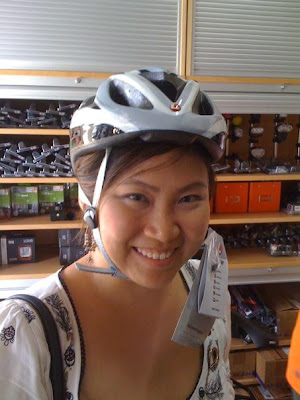 Unlike Gwyn, this actually isn't my first but second helmet. I received my first helmet when I turned 18 and they gave me a green one that weighed a ton and told me to decorate it with some leaves and what not. Even till now, they haunt me every other year and make me put it back on. And I must point out the quite magical powers that it possess; Put it on and your brain stops functioning, makes you feel like sleeping. If you don't believe me, just ask any Singaporean son!

Evidently, I am much happier with my second helmet. 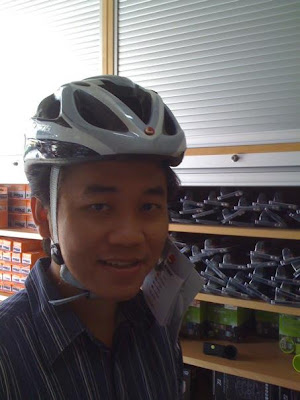 After some thought, I went for the Matt Black in the end.

Late at night, we went for our usual Mid-week night cycling. Today was a bit special. On top of test-wearing our new Limars, we were going on a reconnaissance ride. We call it The Office Recce. Gwyn will be attempting to cycle from home to work this friday, in commemoration of her last day in office. 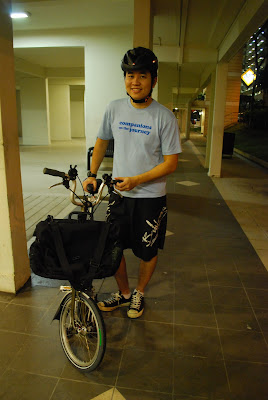 The planned route took us from Bishan Park through the Bishan-Kallang PCN to Potong Pasir Ave 1. From Potong Pasir Ave 1, we would hit Macpherson Road through Sennett Estate before getting on Tannery Lane to our destination.

Here is the overhead bridge that we had to cross on the Bishan-Kallang PCN at Braddell Road. (And yes there was a man bringing his bike down when the pic was taken) 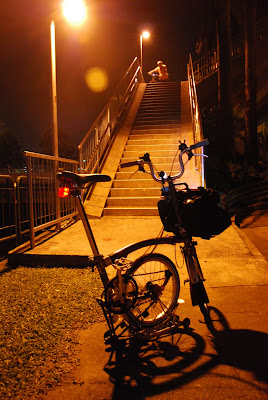 The ride was a breeze. It took less than an hour to reach our destination. Miraculously, the time taken via cycling compared to public transport (train + bus + walking) is about the same, if not shorter. 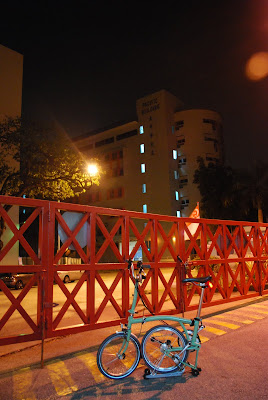 Mission accomplished, we popped by the Soya Beancurd stall at Potong Pasir again on our way back. There was also time for some late night grocery shopping. Our T-Bag sure did come in handy! 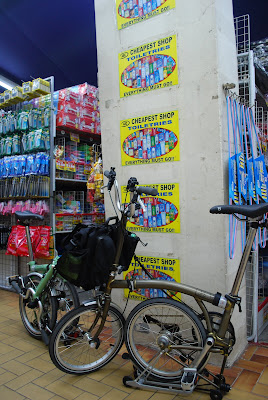