Our first summer experience is proving to be hot, hot, hot! It's close to the Singapore heat but less humid. Because it was cooler outside than indoors, we brought our bikes out for a spin today.

One of the simplest yet greatest joy of riding is the feel of the wind against your face. On a hot day like today, that feeling is priceless.


The Kapiti Coast is about 50 km away from Wellington city. Compared to Wellington city, the climate is known to be warmer. Despite being only 50km apart, the weather in both places can be quite different. Commuting daily, many times have we board the train along the coast with sunshine yet only to be greeted with downcast and drizzle in the city. Just yesterday, we read about flight delays at Wellington airport due to low fog. We were like "what fog?"


We rode along Raumati beach, one of the many beaches along Kapiti Coast. There is a flat and wide shared path for both pedestrian and cyclist.


The island at the back is Kapiti Island. Hence, the area Kapiti Coast. It's a nature reserve that allows a controlled daily number of visitors on the island. You will see lots of native flora and fauna, some endangered, like the Kiwi bird. 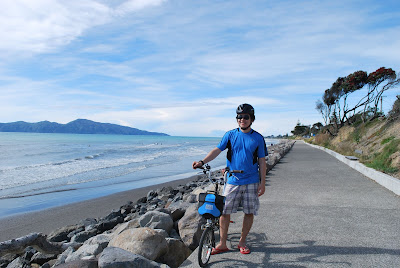 It was so warm, we rode in shorts and flip flops. We couldn't lose the helmet. NZ being one of only two countries in the world that require helmets by law. 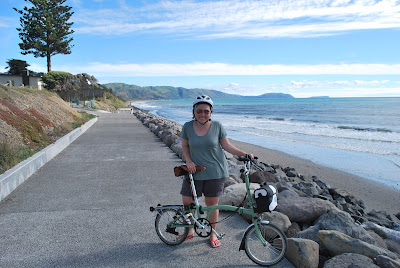 It was a hot day and the sea was calling out to us. We had no second thoughts on dropping our bikes, especially Gwyn who left in a jiffy.


The water was cool and refreshing. If only we had our beach gear on us, we would have gone for a full dip. Thank goodness for the year end holidays, we will be back for more.


For the folks at LCSG, Tour de Middle Earth?


It was a great way to spend Christmas eve, rolling by the beach and just chilling. Hope you had a good Christmas Eve too.

We wish all our readers a Merry Merry Christmas! Life's a journey, enjoy the ride!
Posted by Kevin 2 comments:

It was Ho Ho Ho on the Choo Choo train today. The Capital Connection ran a decorate your table challenge on board their trains today and the response was extremely positive.


Props were all out in multiple array of colors. There were mini replica trees, toys, caps, socks, gift wraps and everything Christmassy. Passengers turned up with their Santa suits. There was even room for an actual tree.


If you didn't know, Kiwis take their decorations very seriously. The amount of detail and effort put in was amazing. It was fantastic. Random strangers got together, props were passed around and everyone got involved. 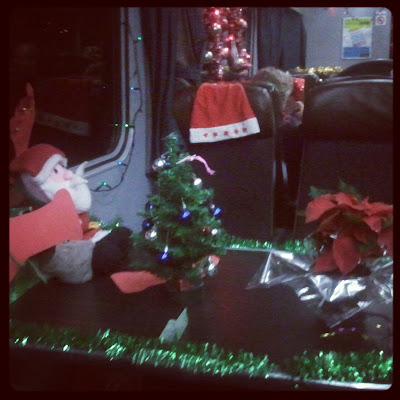 Us included, we did our part and joined in the fun. Ho Ho Ho.


What started out as decorate your table soon transpired into decorate your entire cabin and get everyone moving. The festive mood around the cabin was certainly evident. Random people chatting, photo-taking, giving out chocolates and strawberries.

We were fortunate to be in a cabin that was in it to win it. Midway along the trip, some passengers started singing Christmas carols.


It was quite the experience and not something we would come across in Singapore. It wouldn't be feasible to have a similar contest would it. There is probably not going to be enough space! 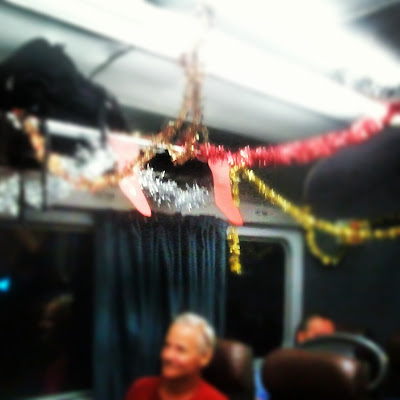 Summer is here and the flowers have come out to play. Just the other day, we were greeted with some surprise additions in the garden.


What used to be a green bush blossomed into purple flowers out of nowhere.


The Pōhutukawa (Metrosideros excelsa) aka the NZ Christmas tree has timely started producing brilliant red flowers. And no, they are not rambutan trees. It's one of New Zealand's many native trees under threat from possum attack, and has been marked for conservation.


We had friends and fellow cycling enthusiasts, Juliana and Tim visit from Gisborne during the weekend. We knew Juliana and Tim through LoveCyclingSG. It was like a mini LCSG experience - Eat, Ride, Photo.

We took a short ride to Raumati Beach Village for lunch at Banana Leaf, newly opened Malaysian restaurant. They do one of the more authentic satays in Wellington.

Yes, we were guilty of the classic "finish eating then take picture" move....


After lunch, we headed down towards the beach for the killer group shot. Superman: Man of Steel premiered early. Tim had his superman moment when he ripped his shirt off to reveal his LCSG roots.


The weather was awesome. We tried to sneak in a bit of Kapiti island into the shot under the glaring sun.

It was good fun and great catching up with Juliana and Tim. I'm sure we'll ride again soon. Maybe in Gisborne? :)


We rolled along towards the train station where we bade farewell. On our way back, Gwyn and I had an up close and personal encounter with a fellow stallion. We stopped along the road, stretched our hands over the wired fence and said hi.

From one to another, the horse seemed to be interested in our steel framed stallions. We don't blame him, the Bromptons do attract quite a fair bit of attention.


Summer is beautiful and Christmas is approaching. As the clock counts down to Christmas, we just can't wait for the holiday season! There's lots to do and I reckon more riding and blogging should be on the list.

Till then, to all our readers, keep calm and ride on!
Posted by Kevin 4 comments: