Have you seen a kiwi before? Gwyn got a glimpse of them this morning at Moana Lodge, where 20 Rowis, the most endangered kiwi species in the world were prepped up for release onto Mana island.

This was all part of the conservation efforts of the Department of Conservation (DOC) and BNZ Save the Kiwi Trust, to help repopulate the critically endangered species.

Ironically, kiwis are flightless birds. The really sad thing is that there remains only about 300 of them left in the world. They are a national symbol for New Zealand, so strong the association that New Zealanders have also been known around the world as Kiwis!


It turned out to be quite a massive operation with the media, military and helicopters involved.


Some representatives from the Maori community were involved as well, including a Maori chief who led prayers before the operation took place.

"It was such an amazing experience and you could feel that it was a special and once in a lifetime project" quote Gwyn.

It was such a surreal experience being able to witness the process from the prep stage in a garage to the Maori prayers and actual take off. This will certainly be a moment to remember for a long time. =)
Posted by Kevin 2 comments:

Talk about living life positively, what better way to embrace the cold mid winter temperatures than with arms wide open.

There was a huge carnival atmosphere about the Mid-Winter Dip at Plimmerton yesterday. Chilly conditions of 4 degrees failed to deter some very enthusiastic participants, all 190 of them.

Our brave warriors turned up in all shapes and sizes.


It was done in great fun and also in the name of charity where proceeds for the day went towards Plimmerton Kindy.

Maybe next year, we'll dip in the fun!

Posted by Kevin No comments:

Two weeks ago during the Queen's weekend, Gwyn and I headed up north to the Carrot Capital of New Zealand, Ohakune.

You know you're at Ohakune when you're greeted by a massive carrot.

Sure, we like our carrots, but we're certainly not obsessed with them. So what made us drive for 4hrs and 280km?

Friendship brought us here. It was good to catch up with one of the original Beaver gang, Stephanie, who is now based in Ohakune.

The lure of snow was another factor. Coming from Singapore where it is summer all year long, snow was a whole new world. While Ohakune is known for it's carrots, it is also famed for being the gateway to the snow mountains during winter and ski season.

We were about 2 weeks early. Ski season hasn't officially started and the snow mountains were closed. But we were greeted with a lovely sight that morning.

The view was majestic, though we came to a point where we felt that we should head back as the road conditions were beginning to worsen. There was ice on the roads and safety was a concern. Next time, we'll return with our snow chains.

Here at the train station, we met a special resident.

It turns out that Harry has a book written about him. 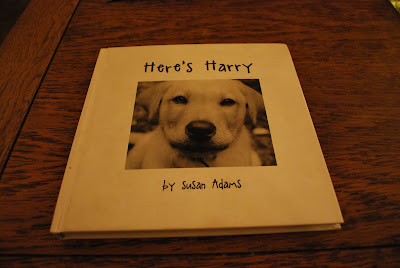 How amazing is that? Free spirited, friendly and never on a leash. Wanders around the town and enjoys chilling by the station. If you are ever in town, do drop by and pat hi to Harry.

Ohakune's a really interesting town, usually dead but comes alive during winter. We bid farewell after 2 nights, knowing that we will surely be back for more and this time for some ski action!
Posted by Kevin 3 comments: